What is 5G? 5G is the term used to describe the next-generation of mobile networks beyond the 4G LTE mobile networks of today. As of mid-2016 there was no standard so the definition is still very fluid. It is assumed that 5G networks will not become commercially available until the 2020 timeframe.

The International Telecommunications Union (ITU) will be the standards body that releases the final standard, which is also being referred to as International Mobile Telecommunications (IMT)-2020. The 3GPP is the mobile industry standards body that will submit a proposed specification to the ITU to be part of the IMT-2020 standard. Mobile operators and vendors all participate in the 3GPP specification process. 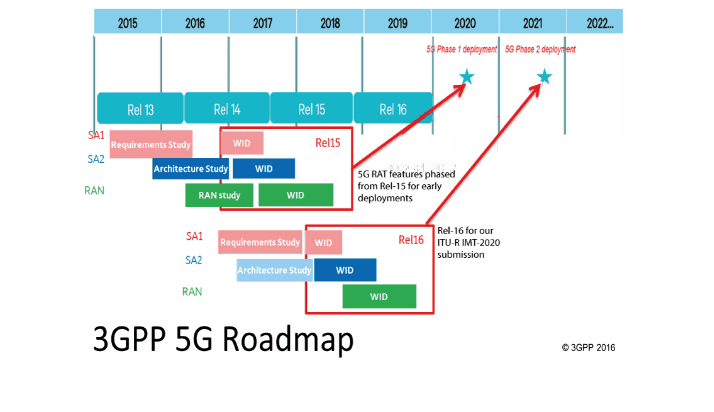 The vision of 5G is becoming clearer as we move closer to 2020. Most experts say 5G will feature network speeds that are blazingly fast at 20 G/bps or higher and have a latency that is mere milliseconds. Not only will people be connected to each other but so will machines, automobiles, city infrastructure, public safety and more.

5G networks are also expected to have always-on capabilities and be energy efficient, all of which will likely require new protocols and access technologies.

Some operators are attempting to be very aggressive with their deployments and push the standards process forward. In the U.S. Verizon has formed a 5G Tech Forum along with other vendors like Cisco, Ericsson, Nokia and Apple. The group’s goal is to collaborate on early 5G specifications and then contribute those to the 3GPP. Verizon released its specifications to vendors in July 2016. Meanwhile AT&T’s tactic is to not release its own specifications but instead to try to speed commercialization of 5G once the 3GPP releases its first official specs, expected in mid-2018.

5G will likely be designed to build upon the existing LTE networks and many features will start to be available as part of the LTE-Advanced Pro standard.

Self-organizing networks (SON) will likely also be a key factor in the radio access portion. Other technologies such as coordinated multipoint, which lets operators have multiple sites simultaneously transmitting signals and processing signals, will also likely be a key technology.

SDN is a Stepping Stone

Software-defined networking (SDN) and network functions virtualization (NFV) are going to play a key role for operators as they prepare to migrate from 4G to 5G and scale their networks quickly.

One reason the definition is still unclear is because unlike any other wireless network upgrade, how 5G is architected and deployed will depend upon how the network is used. For example, video traffic is expected to grow substantially making it necessary to provide higher speeds for applications such as streaming video, video conferencing, and virtual reality. To achieve this type of performance, the network will likely need a lot of small cell coverage and will take advantage of higher bandwidth spectrum.

At the same time, many envision 5G being the network for the Internet of Things (IoT). In order to support a huge number of devices, many of which require longer battery life, the 5G network will have to be extremely efficient in its low-bandwidth transmissions and have enhanced coverage.